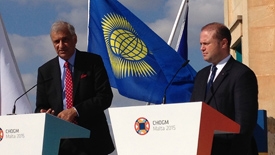 The Commonwealth Heads of Government Meeting (CHOGM) took place in Malta from the 27-29 November 2015. Member states gathered to discuss issues including climate change, building resilience in small states, trade and sustainable development, the empowerment of youth, gender equality and human rights. The summit concluded with an agreement on climate change action ahead of COP21. The event also marked the announcement of the next Secretary General. Karmalesh Sharma will be succeeded by Baroness Patricia Scotland, former UK Attorney General and Minster of State and the first woman to take up the post. Full details of the summit and the final communique can be accessed here.